How to Mine Cryptocurrency?

“I am very excited about the prospect of using cryptocurrency, not just as a money equivalent, but using it as a way to earn something as a result of doing some type of work.”

How to Mine Cryptocurrency?

The last decade has shown how cryptocurrency entered the mainstream market with a big bang, attracting the attention of investors and participants from around the world. The workings of the technology behind cryptocurrencies — namely, blockchain — has fascinated cryptocurrency enthusiasts for years on end.

Perhaps more importantly, the prospect of becoming ‘crypto-rich’ remains one of the key drivers of the exponential growth the cryptocurrency space has long enjoyed. At the beginning, a lot of people got involved with crypto simply because they heard it’s a profitable and worthwhile venture. It is, if you’re armed with the right kind of knowledge — hence the reason for this article.

Besides the regular trading, there are other ways of making money with crypto. In this article, we’ll look at an important concept in the crypto space (and a lucrative earning opportunity): cryptocurrency mining.

But How to Mine Cryptocurrency? Continue reading and you’ll learn what mining is and how to start mining cryptocurrency.

What Does “Mining” Mean?

Most people probably know what crypto mining is but they have no idea how it works. Maybe you’ve heard the term ‘mining’ at some point in crypto-related conversations but couldn’t quite wrap your head around it.

Cryptocurrency mining is a process where machines perform some specific tasks to get a particular amount of cryptocurrency in return by the use of computers and cryptographic processes. The task performed by the miners is solving mathematical complex functions and recording the data value in blocks of a blockchain. The more you explore a particular mining pool, the more the functions become harder – making it difficult to continue unless there is a provision of bigger and more capable machinery.

Each block holding transaction details contains a Proof of Work (PoW) which is the strength of every blockchain as it makes it extremely difficult to alter any value in each block. PoW is the algorithm that prevents double spending of coins in the crypto space and in case of crypto mining, it shows that the mining of a block is completed.

The goal of mining is to add discrete data to blocks by solving tough mathematical problems which require expansive and cosmic electrical and computational power. At consistent intermissions, using cryptographic functions, miners all attempt to decode a block that is having the transaction data which means many miners throw their hat in the ring to add each block, it is the miner who eventually solves the problem that gets to add the block — alongside its approved deal — to the blockchain.

Initially, only cryptography enthusiasts were interested in cryptocurrency mining. However, the popularity of cryptocurrency in recent times has made everyone consider mining as a lucrative venture.

Having explained that, let’s dive into how to mine cryptocurrency. 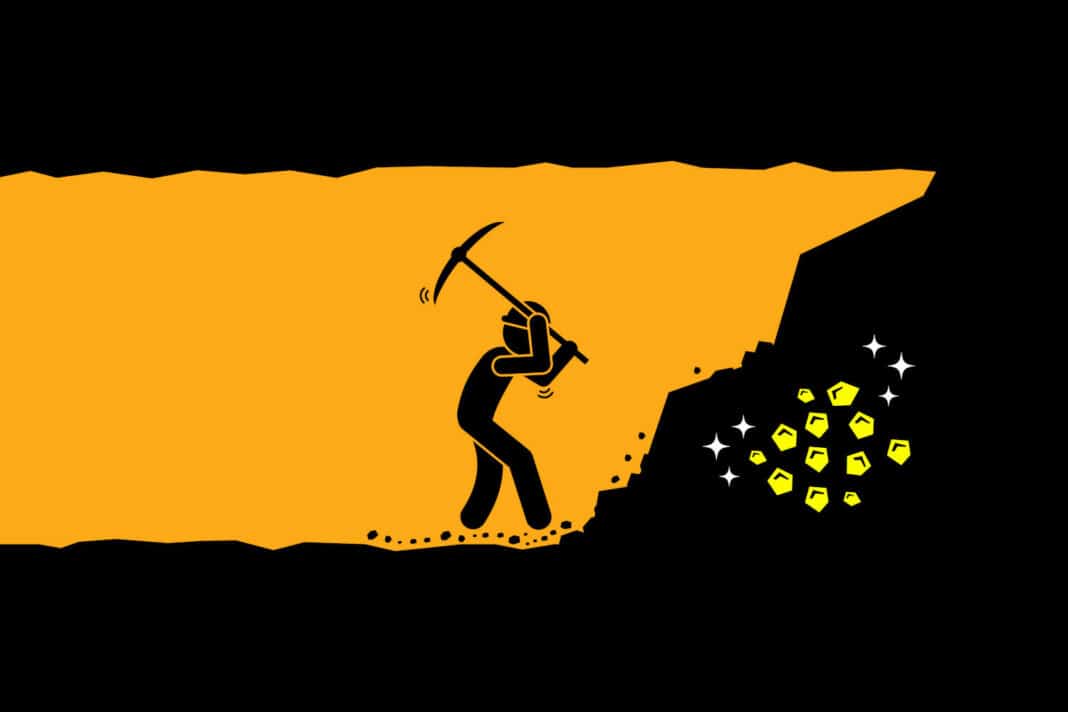 How to Mine Cryptocurrency – Different Ways to Participate

There are various ways you can mine cryptocurrency, but this article will just cover the easiest and the most straightforward ones.

This method is the easiest way and probably the most popular way to mine crypto. The method helps you to mine crypto without having to do anything spectacular.

Cloud Mining is a type of mining where you will have to tip someone a certain amount of money to use their miner that is often called a “rig”. In most cases, it is often big corporations that rent out their mining rigs for others to use remotely for an agreed period of time. The crypto generated with the period will be transferred to the client’s wallet having to remove the incurred maintenance and electricity costs.

These big corporations that offer this service usually have very vast facilities for mining with numerous farms of rigs usually in tens and hundreds in their disposal for a number of people to use. Some of these companies grant access to the mining facilities for free or a paid price. Though many people get attracted to the free plan, it has to be understood that there are drawbacks to it.

This type of mining uses processors for crypto mining.in time past, it is a viable and very popular option of mining, but in recent times, fewer individuals are embracing the option. Reason being that the mining is extraordinarily slow – you can keep mining for months without having a commensurate coin to your effort.

Comparing the cost of cooling and electricity with the total coin gain, it is not always worth it. Though the CPU mining can be done with a laptop, it is not advisable as it causes an overheating of the laptop which contributes to eventual damage.

Of all the methods of mining, this is probably the most popular and renown method of mining coins. It is one of the first options available to you if you are intending to invest in cryptocurrency mining.it is relatively cheap and quite efficient. Though the construction cost quite much at first, it is an investment that will pay off at the end – faster than other methods of mining.

GPU (Graphics Processor Unit) rigs use graphics cards to mine coins and a standard rig comprises a motherboard, processor, rig frame, cooling frame and graphics card up to 8. A nicely built and efficient GPU rig can cost up to $,3000 which is considered an enormous investment but pays off faster and nicer than CPU mining.

The controversy against this miner and method of mining is that the recent version of the miner is so powerful that it can rob other CPU and GPU miners of their coin and the possibility of keeping up with their hash speed. This raised eyebrows in the cryptocurrency community, with people calling for a ban of ASICs.

Top Cryptocurrencies to Mine in 2022

Since we’ve covered in detail what mining is all about and how to mine cryptocurrency, we’ll now take a brief look at the best cryptocurrencies to mine in 2021. I the list goes thus with the mining reward per block and the mining algorithm each coin uses:

Bitcoin (BTC) is missing from this list because of the increased mining difficulty on the Bitcoin blockchain. With the increasing competition and complications, the reward for mining BTC is halved every four years but despite that, serious miners built a huge assemblage to mine the coin which led to a massive fallout of regular miners and the hype in the cost of joining a mining pool.

Binance is one of the world’s largest and best-known cryptocurrency trading venues. In addition, it offers to mine many different cryptocurrencies directly on its own platform. try Binance Pool today and start mining cryptocurrencies!

Binance Pool is a comprehensive service platform designed to improve the income of miners. Binance Pool provides users with mining services that focus on PoW and PoS. Binance Pool is an important part of the Binance ecosystem and will take full advantage of its advantages in technology, capital, stock market business, industrial resources and other fields combined with its users just repairing the experience as well as the easy way to try it out.

How to Mine Cryptocurrency in Finland

Currently, in Finland, there is no law against mining and trading of cryptocurrency in the country. Everyone can go about business and investment under the law. In March 2019, the President of Finland signed a bill that the Finnish Parliament passed into law.

The new law states that all exchanges operating in the country must be registered under the Finnish Financial Supervisory Authority (Fin-FSA). You can read more about Finland’s crypto regulations here. If at all any update is needed, Finvesting.net will update this article with the new information.

What are the cons of crypto mining?

Most often, people are focused on the profitability of crypto mining that they forget that almost everything has their drawbacks. For mining, the drawbacks are the hardware and electricity costs, the complexity in setting up and the fact that there are crypto mining scams out there.

Of course, you can say you have nothing to lose by mining cryptocurrencies, but when you factor in the costs of mining and maintenance, you have to be smart about it.

Thankfully, Finvesting has created this guide to help you understand everything you need to know about cryptocurrency mining.

As a beginner, what's tje easiest way to to start crypto mining?

If you’re just getting involved in the crypto space, you can join a crypto mining pool to boost your chances of making profits instead of trying to mine blocks yourself. The competition in the crypto mining industry is fierce, as we have a lot of big mining farms all around the world. You can start mining cryptocurrency by following these steps: